Big skies and colorful rural fields inspired the calming sunrise mural recently painted at our Avon location. The seemingly glowing mural was painted and created by Megan Jefferson, an Indianapolis-based abstract and landscape painter who previously created murals for Jiffy Lube as part of the artist collective Department of Public Words. In 2013, Megan started working as the Grants Director and Community Mural Coordinator for an arts non-profit, the Department of Public Words. Along with founders, Dave and Holly Combs, they created several large murals in the Indianapolis area including the popular Love Train located on the Monon Trail.

During this time, the blank white exterior walls at a few of our Jiffy Lube locations were getting tagged with graffiti, so we met with Megan and the team to learn more about having a mural painted to deter vandalism. That’s when the Every Part Matters mural project was born. In the summer of 2017, Jiffy Lube of Indiana held its first mural event in partnership with the Department of Public Words. A group gathered at Indy Reads Books to help paint the public art. The artwork was designed by Graphic Novelist, Ellen Forney, and was inspired by Marbles, a graphic memoir of her life with bipolar disorder. The mural was later installed at the Jiffy Lube located at 82nd and Allisonville Road in Indianapolis. “When the third mural round was announced and proposals were called for, I really wanted to be a part of this project that I know and love,” said Megan. “I had not yet designed one of the murals myself. I was so excited and honored to have been chosen, bringing this story full circle!”

Megan focuses on landscapes as a theme for much of her work. The broad area of color inspires her as she creates moods, visually. Each painting captures a moment in time and space that speaks to both imaginative and real places. 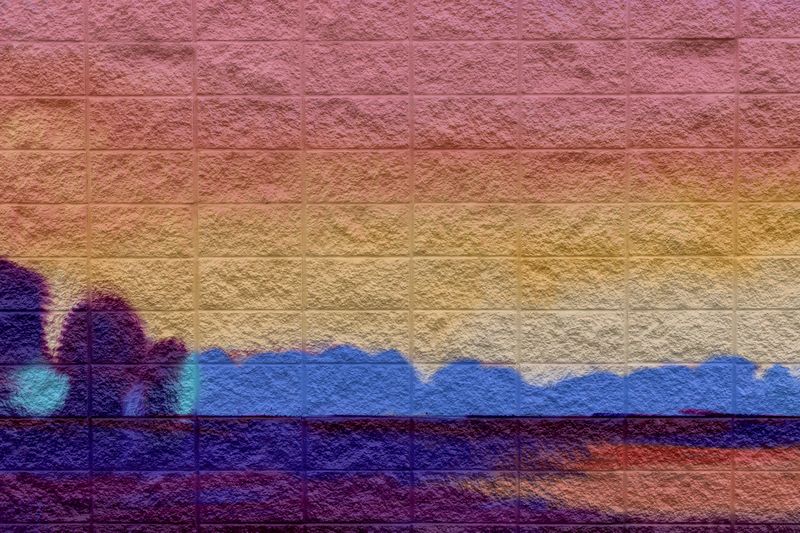 Megan grew up in a small agricultural community in Northwest Ohio. When she first visited our Avon location it reminded her of her childhood hometown that she loved dearly. Since the city continues to grow, Megan wanted to paint a colorful landscape that captured the beauty of rural Avon as it is today.

“I drove around many back roads in Avon and took photos of my favorite scenes,” said Megan. “The mural I created is based on one of the photos I took and preserves and celebrates the beautiful rural areas of Avon.”

Megan chose the 15 different colors of the mural based on the mock up of the design. Since the exterior wall at our Avon location is textured cinder block, painting the surface with a brush would make tedious work. Megan decided to use exterior latex paint with a paint sprayer.

Megan and her husband Corey, who is also an artist, worked on the mural together and were able to finish the painting in one day!

“I’m super excited to be an artist included in this project because I was involved in the beginning—coordinating and installing murals but not ever designing one myself,” said Megan. “I respect and admire the other artists who have created these murals, so it’s an honor to be included amongst this group.”

When the Department of Public Words closed its doors, Jiffy Lube found a new partner to help manage the Every Part Matters mural project – the Arts Council of Indianapolis. The Arts Council coordinates the process of artists submitting designs and then helps match the chosen artists with locations.

“Steve’s vision on supporting local artists while making each Jiffy Lube location unique is just so great,” said Megan. To have corporations support the arts helps make communities more vibrant and inspires creativity in everyone who enjoys the murals.” To learn more about Megan Jefferson you can connect with her here: Since 2016, our Every Part Matters mural project has been bringing beautiful art to the exterior walls of our stores and has been helping Indiana artists grow through their work, an extension of our award-winning Growing People through Work program. Find a Jiffy Lube of Indiana location near you.