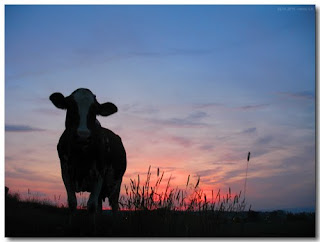 WAKARUSA, Ind. – Cow tipping may be one of those legends people like to talk about but that never really happens. But one cow definitely was tipped in the night (or should we say flipped)  and it is no laughing matter.

Police say a car ran into a cow that had wandered onto a rural road in northern Indiana during the middle of the night, with the animal landing on the windshield and sheering back the car’s roof.

The Elkhart County Sheriff’s Department says 47-year-old John Schertz of Elkhart was taken to a South Bend hospital with a head injury and cuts to the face.

The Elkhart Truth reports Schertz told officers he couldn’t remember what happened in the crash that happened about 2 a.m. Friday near the town of Wakarusa about 20 miles southeast of South Bend.

Police say the cow was killed in the crash and that its owner has been ticketed for violating the county’s animal control ordinance.

Stay alert and drive safely Indiana! And check out Jiffy Lube for some money saving coupons!